Blue from Unreal Raspberry is a straight up, no-nonsense Blue Raspberry; the bluest of the blue - a sweet and fragrant blend of Blueberries and Raspberries.

Black from Unreal Raspberry is a carefully blended concoction of tart Blackcurrants along with Unreal’s Blue Raspberry basis.

Red by Unreal Raspberry is a carefully concocted blend of tart Cherries along with the Unreal Blue Raspberry basis.

Yellow from Unreal Raspberry contains a tropical fruit combination of tart Pineapple along with the base flavour of this range from Unreal - a thoroughly Blue Raspberry.

Not impressed with Eliquid,
It has ice in it but doesn't say so in description, I have at least 500mls of different eliquids sitting on my shelf now that i have bought and not been able to vape because they said they didn't have ice in them, but they do.!!! not acceptable,.
The manufactures are misleading consumers for extra sales, ITS UNREAL ALRIGHT.!! Won't be buying any more of the unreal range.
1/5.
Manufactures please start describing your juices properly. Another £10 wasted plus £3-£4 shipping, plus the nic salts and vg all wasted for nothing.!!
Whether the ice is subtle or freeze you monkeys off, all E-Liquids with ice in should be labelled.as such.!!! 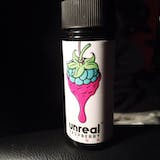 Great juice, has the best taste of all the juices I have tried and that's a lot. Happy to vape all day.